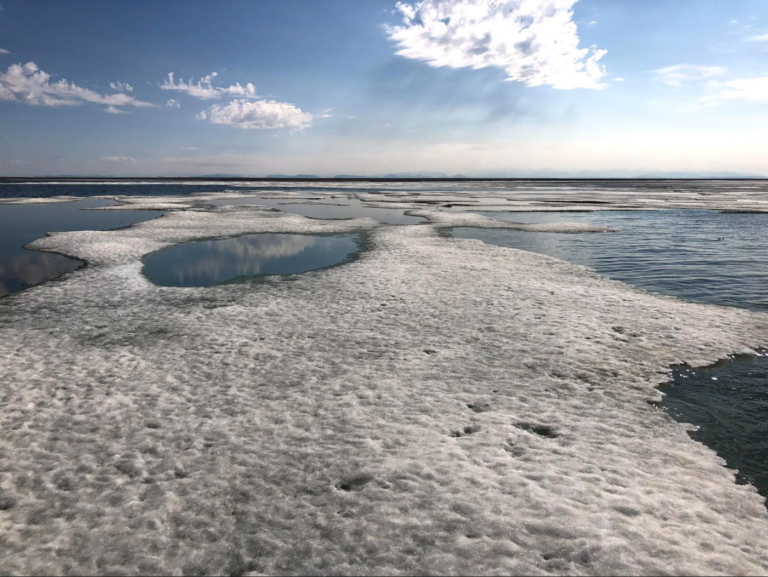 A new study looking at ocean acidification and ocean-atmospheric chemistry along the Arctic coast of Alaska is providing scientists with a new perspective on the relationship between local drivers affecting pH and the role of lagoons with air-sea carbon dioxide exchange. 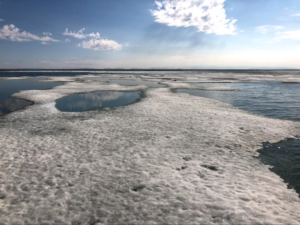 This images shows Kaktovik Lagoon during sea ice break up. Kaktovik Lagoon is one of a series of coastal lagoons that fringe the Arctic National Wildlife Refuge and borders the east side of Barter Island. Photo: BLE LTER

Researchers deployed a device called a SeaFET in the Kaktovik Lagoon, a body of water adjacent to the community of Kaktovik which is about 100 miles east of Prudhoe Bay. The sensor collected high frequency measurements of pH, salinity, temperature and PAR (Photosynthetic Active Radiation) for nearly a full calendar year, capturing both ice-covered and ice-free phases. The project is nested within the larger Beaufort Lagoon LTER (long term ecological research) project funded by NSF, and was conducted in the traditional and current homeland of the Kaktovikmuit.

Several illuminating trends emerged in the data. One was the rapid daily change in pH in the lagoon during June-September when the lagoon was free of ice. Typically, pH fluctuations do not exceed 0.2 units per hour in Alaska’s subarctic waters, such as those documented in Kachemak Bay. “The changes we were observing were greater than 0.4 units within an hour which was unexpected,” noted UC Davis grad student Cale Miller, the lead author on a journal article in preprint at Biogeosciences discussion. Miller dove into the scientific literature to see if he could find anything comparable. He discovered there wasn’t a lot of hourly high frequency pH data to compare with, and values in Kaktovik Lagoon appeared to be some of the most dramatic recorded. Better understanding these dynamic conditions are expected to lend insights into the community structure of the resident species in the lagoon, which includes a rich diversity of anadromous fish. Future research will include looking into adaptation mechanisms used to survive the dramatic changes. 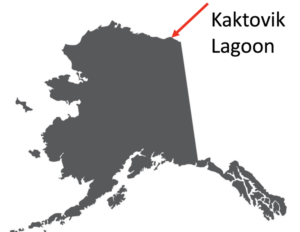 Another take-home was the fluctuating relationship between pH and salinity in the water. These variables are often correlated in marine systems, as each are correlated with alkalinity. However, Miller and his team noticed that the relationship between pH and salinity spanned the range of positive, negative and neutral correlations that changed by season. The pH-salinity relationship during the two ice-free seasons were found to be either positive or non-existent, while the ice-covered season resulted in a negative correlation. Given the extreme daily variability observed in the lagoon, the shifting pH-salinity relationship suggests that the physical and biological processes that influence pH are dynamic and susceptible to future change – particularly from freshwater runoff and shifts in the way organisms who live there feed and produce CO2. Annual trends in pH variability are also tenuous and appear to be affected more by organism processes, however this may change if there is increased freshwater input from land into the lagoon.

A third insight from the project was that Arctic lagoons may be outgassing CO2 . Bodies of water or other biomes on earth can act as CO2 “sinks” (absorbing CO2 from the atmosphere) or “sources” (emitting CO2 into the atmosphere). The world’s oceans have generally acted as carbon sinks, where the absorption of additional carbon causes an increase in acidity and results in the process we know as ocean acidification. However, depending on local or regional chemical and biological processes, water bodies can also be CO2 sources – particularly nearshore estuaries. The Western Arctic has long been considered a large sink for atmospheric CO2 that is susceptible to rapid acidification relative to other oceanic regions. However, the findings from this project suggest that the lagoon ecosystems may not follow this general pattern, and that more estimates on the air-sea exchange of carbon in the region are needed. Since about 50% of the Alaskan Arctic is made up of coastal lagoons, it is possible that new findings could change the estimates researchers are making about the magnitude of the Arctic’s CO2 sink. 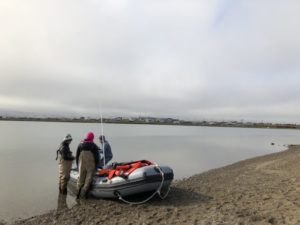 The study underscores the need to expand high frequency measurements of pH and other ocean acidification variables in Arctic lagoons to provide insights into local drivers, species adaptations and the role of these water bodies in removing or adding CO2 to the atmosphere. There is also interest from the science community in better understanding the “benthic metabolism” or how the organisms that reside under the ice feed and produce CO2 and ultimately modify the pH of the water.