What do 10 years of data show in the Gulf of Alaska? 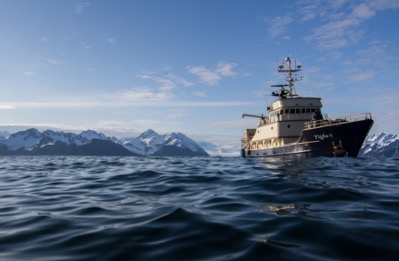 The USFWS M/V Tiglax stops to take water samples near the beginning of the Seward Line. Photo by E. Ershova

The Ocean Acidification Research Center (OARC) at the University of Alaska Fairbanks recently completed ten years of ocean acidification observations on the Seward Line, a transect that extends 230km into the Gulf of Alaska starting at a point near Seward.  Ocean acidification measurements were added to this multi-decadal oceanographic time series in the spring of 2008, and the last research cruise was completed in the fall of 2017. 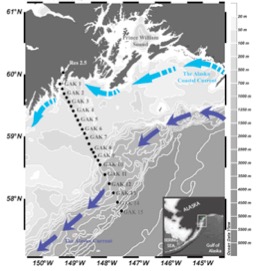 The Seward Line has 15 sampling “stations” where the research vessel stops to take samples throughout the water column. The last station extends off the continental shelf break.

Ocean acidification has been shown to impact the health, prey, and behavior of some commercially important species. Recent data have already documented acidified conditions in the Gulf of Alaska, resulting from the combination of natural variability (seasonal circulation patterns + seasonal respiration) and human-generated carbon dioxide (CO2). As coastal Gulf of Alaska waters continue to absorb human-derived CO2, it will be important to monitor these chemical changes and try to understand how they relate to the temporal patterns and the ecosystems they impact.

Researchers are just beginning to dig into the complex math and analysis required to understand the data, but several early themes are emerging: 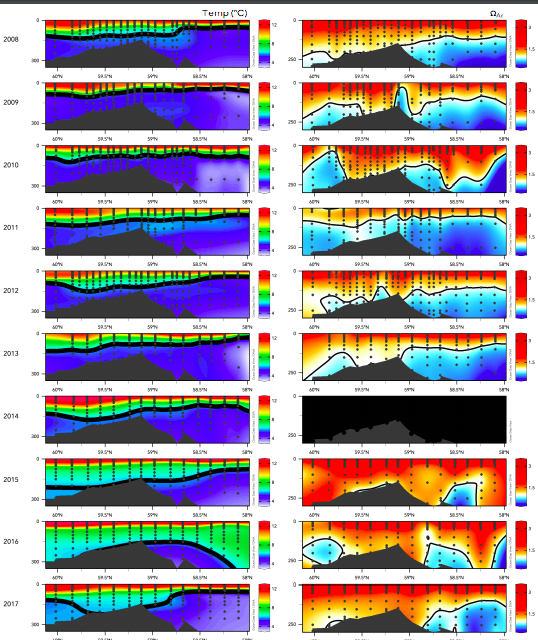 This figure shows the fall temperature (left) and aragonite saturation states (right) on the Seward Line across the time series starting with the year 2008 on top. The X-axis shows distance from the coast and the Y-axis shows depth in the water column.  Note that warm colors indicate supersaturated waters, while cool colors indicate undersaturated (corrosive) waters. During very warm years, saturation states were high in fall, perhaps representing an important source of resilience to OA impacts for the Gulf of Alaska.

Differences in aragonite saturation (Ωar), an important parameter reflecting corrosivity, shows correlation with water temperature. Ωar were generally lower in cooler years and higher in warmer years. While the relationship between temperature and Ωar is not linear, there is a positive correlation. This means waters were, on average, more corrosive during colder years.

Additionally during these warm years, we observed an increase in primary production, measured by the drawdown of normalized DIC (nDIC). Since this reduced the amount of carbon in the surface water, this could also represent a potential mitigating factor for ocean acidification. However, the carbon that is drawn out of the surface is commonly exported to the bottom, where bacterial remineralization returns it to the water column, so it is possible that natural acidification pressure from respiration during the Blob event was greater.

The quest to understand natural variability

We don’t understand all of the patterns in this 10-year time series yet, but researching interannual variability over this time scale will help us observe long term climate change and ocean acidification in this region.  With 10 years of data, we were able to observe that long-term patterns and short-term events have big impacts on the carbonate chemistry.  Understanding the underlying mechanisms will help inform and update an existing algorithm and regional model of ocean acidification for the Gulf of Alaska. After this initial baseline effort, these models can be maintained with limited observational data. OARC will continue to collect this data from our mooring array each year, and conduct more extensive observational data once every four years.

We look forward to more data crunching on this first OA decadal time series in Alaska.  In ten years we participated on more than 20 cruises on the Seward Line.  This effort would not have been possible without the crew of the USFWS M/V Tiglax.  We are also thankful to all of the researchers, students, and volunteers that helped us collect over 10,000 samples.  We are grateful for funding from the Alaska Ocean Observing System, the National Pacific Research Board, and the State of Alaska.