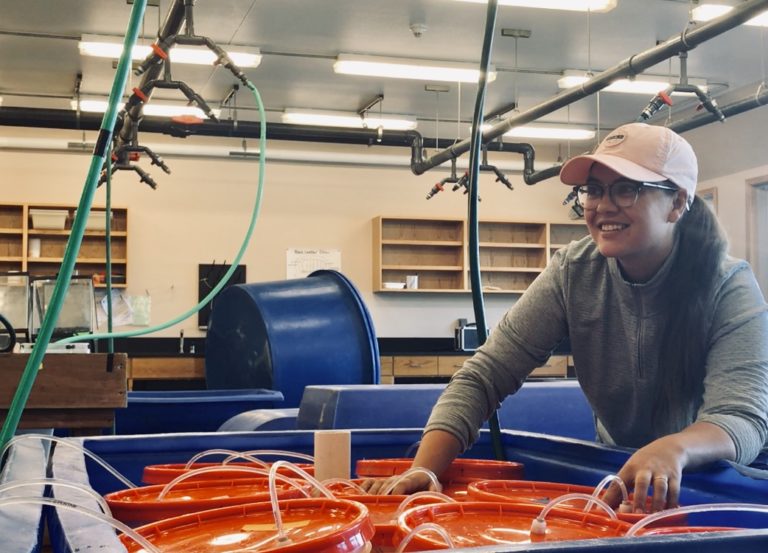 Across the bay from Homer this summer, 5-gallon buckets are lined up at the Kasitsna Bay Lab protruding with a network of colorful tubing and sitting within pool-sized tubs of temperature controlled water. Though unapparent at first glance, these buckets provide the venue for an ocean acidification experiment in the form of a timed race with a most unlikely racer: the Pacific Plate Limpet.

When people think of ocean acidification, they usually think about impacts to shell thickness or the ability of the organism to grow a shell at all. But new research is now looking into behavioral responses in shelled creatures and the effect of changing water chemistry on predator-prey relationships. In the case of the Pacific Plate Limpet, an increase in acidity may mean a slower escape from a predator like a sea star, and researchers in Alaska are trying to see how that plays out in the lab.

Leading the experiment at Kasitsna Bay is Shelby Bacus, a grad student at UAF who works with research scientist and professor Amanda Kelley. Bacus’ experiment aims to see whether the limpets can detect the scent of their predator and follow their innate response to flee, or whether this is disrupted when pH and temperature levels are altered. 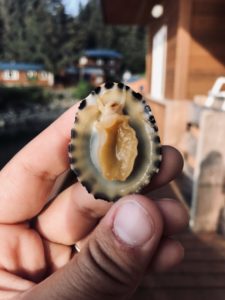 To conduct the experiment, Bacus is varying both pH and temperature under 4 treatments (normal pH/normal temp, normal pH/high temp, low pH/normal temp, and low pH/high temp) and comparing the differences. What does this look like in practice? Bacus summarizes it in a couple of quick steps: Place the limpet in the center of the bucket that contains water from one of the four treatments. Add water that is conditioned to smell like the predator. Watch the limpet crawl out of the bucket and record the distance, direction, and time it takes. She notes that limpets don’t move very fast in regular life but to escape from a predator they can leave the bucket within minutes. “I’m always impressed with how fast they get out of there,” she notes. “They just scale the wall.”

It will take several weeks to run enough trials of the experiment to develop concrete results but similar studies on other marine organisms demonstrate that the limpets are likely to show an altered or slower response time under the higher acidity treatments.

Beyond just measuring escape times, the project is also building on other experiments to look at temperature tolerance, stress hormone levels, neurology and metabolism. Among the questions are whether OA requires limpets to allocate so much energy towards their acid-base regulation that they can’t do other things, or whether there is a disconnect between their brain and the scent. The researchers are also looking into whether affected limpets could regain their normal predator response if they were transferred back to normal conditions, or whether these changes in behavior are permanent. 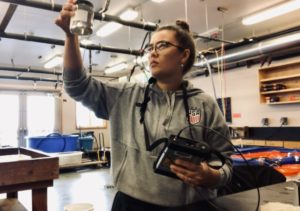 When asked why we should care about the interactions of these tiny creatures, Bacus is quick to point to the implications for the larger ecosystem. “Mollusks are small but they have a big influence on algae concentrations, which in turn control a lot of the ecosystem. If you remove the grazers, you might see paradigm shifts and more algae-dominated environments,” she noted. “At that point, maybe other organisms will come in. We need to look at these trophic or species interactions to be able to make predictions.”