Ocean acidification detection capacity expands in the Gulf of Alaska

Two new research projects awarded to the University of Alaska by the National Science Foundation (NSF) will greatly increase the ability of scientists to determine the impact of ocean acidification on Alaska’s nearshore habitats. 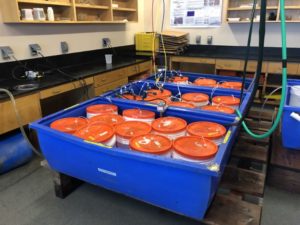 The experimental OA system at the Kasitsna Bay Lab in Kachemak Bay. Pictured are animal culture containers during a 2-way experiment (temperature and OA) on the black chiton. Photo: Amanda Kelley.

The first project funded the installation of an ‘ocean-change’ lab which included the build-out of a permanent ocean acidification experimental system at the Kasitsna Bay Laboratory in Kachemak Bay. The experimental system can manipulate multiple environmental parameters to mimic future-ocean conditions, allowing researchers to characterize the response of important marine species to ocean change.

When asked about the impetus for writing the proposal to fund the lab, Assistant Professor Amanda Kelley, from the University of Alaska’s College of Fisheries and Ocean Sciences replied, “The establishment of this lab in the Gulf of Alaska is a game-changer. While the need to study OA in Alaska is high, the cost of the equipment to carry out such experiments is prohibitively expensive. The goal of this project was to ensure that researchers from both Alaska and outside of the state had the necessary tools to conduct cutting-edge OA research.” 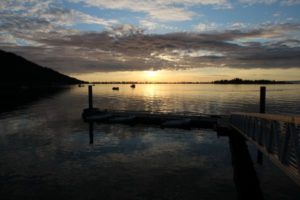 Sunset from the dock of the Kasistna Bay Lab. Photo: Amanda Kelley.

With this lab now in place, scientists can increase the number of experiments that test the response of key Alaska species to future ocean change scenarios, drastically improving scientists’ predictive capacity. Until now, the only other permanent ocean acidification experimental system was located at the Alaska Fisheries Science Center Kodiak Laboratory. Already, an experiment examining the impact ocean acidification and increased temperature on the black chiton has been carried out at the Kasitsna Bay Laboratory.

Additionally, the NSF EPSCoR program (Established Program to Stimulate Competitive Research) recently awarded scientists from UAF, UAA, and UAS a 5-year grant to quantify the changes to Alaska’s terrestrial and marine ecosystem that result from human-driven climate forcing. A new pH sensor network will be deployed in the waters around Juneau to increase nearshore ocean acidification monitoring efforts. Researchers will also conduct a series of ocean acidification experiments on juvenile pink salmon and other marine invertebrates. This award will also continue the funding the pH sensor network that is currently active in Kachemak Bay that has been operating since the fall of 2017.

What we’ve learned so far in Kachemak Bay 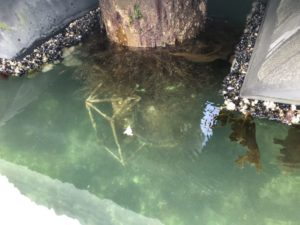 Pictured is a seaFET pH sensor moored to a dock at the Kasitsna Bay Lab during a minus tide. Photo: Amanda Kelley.

The first year of pH data from Kachemak Bay reveals a seasonally dynamic system showing higher acidity in the fall and winter and lower acidity in the spring and summer. This is consistent with other parts of Alaska because plankton and other photosynthesizing organisms take up carbon dioxide from the seawater in the late spring and early summer, thereby temporarily raising the pH (recall higher pH means lower acidity).

Results also showed extreme variability in each monitoring location, even over the course of a day. Observed pH values in both Jakolof Bay and Bear Cove tracked hourly rates of change on the order of 0.18 and 0.10 units, respectively, with total variability within a 12-hour period exceeding 1 pH unit. While this may not sound like a lot, pH is a logarithmic scale, meaning 1 pH unit is equivalent to a 10-fold change.

To put the results in the larger context, Kachemak Bay experiences more pH variability across nearly all time domains- hourly, daily, and seasonally relative to other monitoring sites around the globe. At this time, it is difficult to compare pH in Kachemak Bay to other nearshore areas in Alaska as we don’t yet have another full annual nearshore pH dataset measured at the surface to make comparisons. The new pH sensors near Juneau will be another step towards filling this gap.

Apparent now is that nearshore organisms in Kachemak Bay are being exposed to unstable, non-static pH conditions on tidal and diurnal cycles. Researchers were able to link these changes to tidal and oxygen signatures, shedding light on the dynamics of this system. These data will inform laboratory studies, which can help determine if such extreme pH variability promotes the resilience of marine species. The successful first year of data collection will allow researchers to expand upon this time-series to better determine and quantify anthropogenic (human-caused) CO2 intrusion in Kachemak Bay in the coming years.

This work was funded by the Coastal Marine Institute at UAF and BOEM. For more information on these projects, contact Amanda Kelley at alkelley@alaska.edu